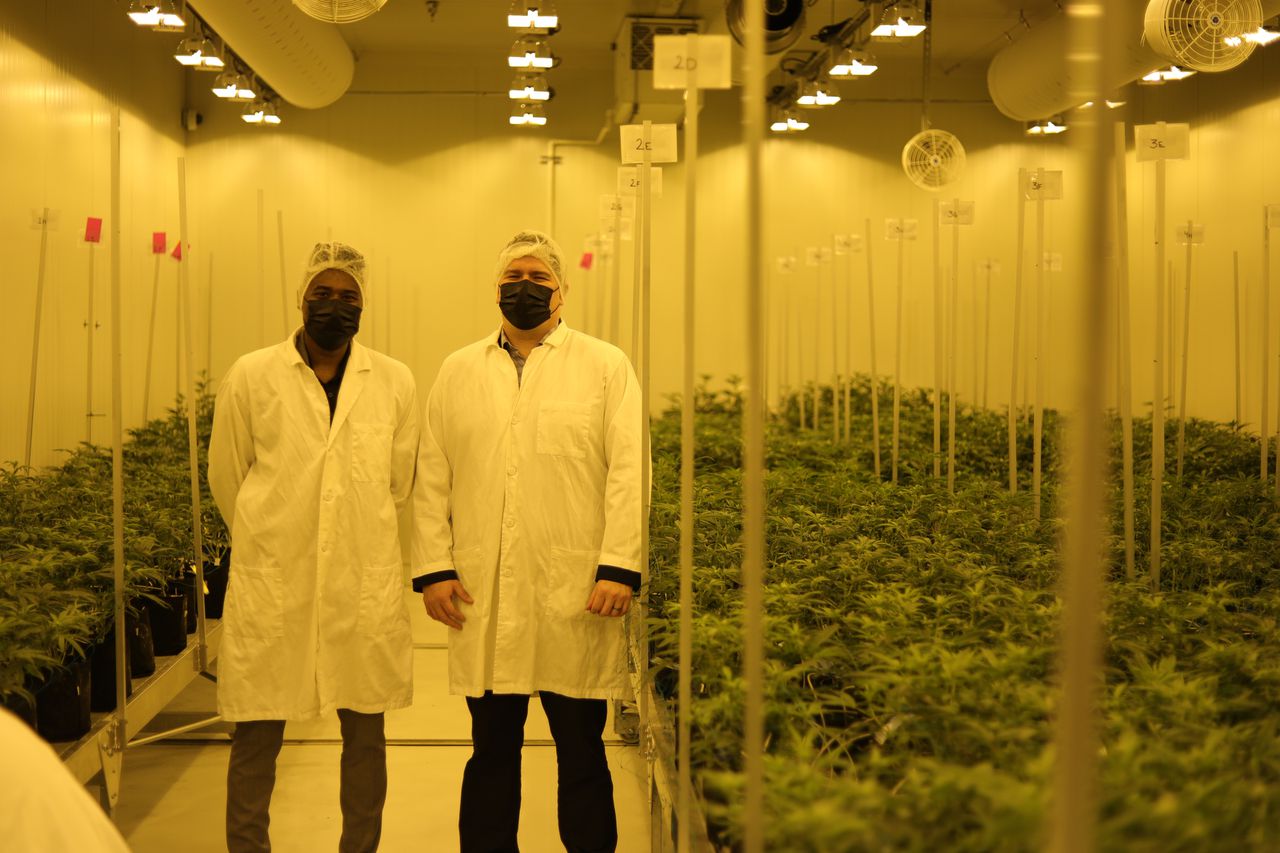 KALAMAZOO, MI — Kalamazoo’s new cultivation and processing plant is producing more than cannabis as the founders work to grow job opportunities, diversity and sustainability throughout the industry.

In August 2020, The Woods cultivation and processing center opened at 822 Schuster Ave. The 30,000 square foot warehouse has been transformed into a high-tech grow production yielding 3,500 plants.

Founders Raphael Thurin and Trent Friske grew up together in Saginaw. In 2014, the pair were working as medical marijuana caregivers.

Thurin had returned home to Michigan after working out in California. His mother was diagnosed with terminal breast cancer and using marijuana to cope with her loss of appetite and sleep due to treatment.

Rather than have her purchase from a stranger, Friske began experimenting with indoor growing himself. He found out his childhood friend was also growing and the two teamed up.

They were underdogs but they were determined to get ahead of the curve.

“We don’t have a lot of resources and don’t have a lot of capital, the best we can do is use this opportunity to take advantage, and learn as much as we possibly can,” he said. “If we start early and plan diligently maybe we can make that vision a reality.”

And so a series of resource and development was put into motion. They tested variations in lights and soil and grow methods like hydroponic and aeroponic.

Making the vision a reality

Fast forward to 2021 and the level of detail throughout the facility is a mix of mad scientist laboratory and state-of-the art hospital.

A motherboard of climate controls shows the “health” of each grow room down to the percentage of humidity. Water and air filtration are monitored constantly to eliminate any outside containments from getting in.

Every surface down to the doorknobs are tested, Thurin said.

A whiteboard sits outside the grow room detailing every variance in the plants over the 18-day harvest period. It looks like a nurse’s clipboard in a patient room and has notes on every one of the 800 mothers growing inside.

Grow Facility Manager Lyndle Morley was attracted to the cannabis industry because of those changing variables every day, she said. She said it was exciting that there was still so much that was undefined even in an environment as controlled as a grow facility.

“It’s a burgeoning industry and I wanted to be a part of creating a standard for it,” she said. “It’s an opportunity to solve brand new problems horticulture has never seen before. And even if they have seen them they haven’t tackled it on this scale.”

The Woods offers 16 different strains of marijuana ranging in levels of tetrahydrocannabinol (THC). The Woods product can be found in 10 different retail locations including Kalamazoo’s Herbology.

Deciding which strains to keep is an ongoing experiment depending on how well they grow and how well they sell, Friske said. The team also tests for flavor, look and smell to determine which products will be popular.

Given that recreational marijuana is still pretty new, they’re finding that customers at the dispensary are looking for the best bang for their buck and gravitating toward higher THC levels, Friske said.

The Woods grows GMO, which is a mix of strains Chemdog and Girl Scout Cookie and tested at 32% THC, Friske said. The trend of wanting high THC levels will likely fade, Friske said.

“Eventually once the rec market matures it’ll be more like alcohol,” he said. “Like a good beer from Bell’s might cost a little more but it’s not going to be 11% ABV and that’s what it costs more.”

The Woods is also collecting data right until the very end of the process.

The state requires that marijuana waste is shredded to the point of being unusable and that the waste weight is reported back to the state. The Woods uses that data to inform decisions both financial and sustainability decisions on how to reduce waste.

Each plant is hand trimmed from stem to leaf. Even then, any bags of marijuana that just don’t look pretty enough to sell to consumers get sold to producers to repurpose as hash, oil or vape cartridge material.

“We don’t really want our product to be out there on shelves and have somebody look at the label and be like, oh this is not very good weed, and associate it with our grow,” Friske said.

Diversifying the industry from the inside out

This year there are plans in the works to expand The Woods’ production to 10,000 plants by renovating the adjoining warehouse of the same size.

So far $5 million has been invested into the current facility and the expansion will require another $4 million in fundraising, Friske said.

It will also create new jobs to add to the staff of 30 currently working at The Woods. Approximately 75% of the current staff came from the Kalamazoo area, Friske said.

Diversity among the staff is paramount, Friske and Thurin said. Both owners were accepted as part of the state’s Social Equity Program.

In an effort to diversify the industry and repair the damages done by the war on drugs, the social equity program offer licensing fee reductions for individuals meeting one or more of the following criteria:

The city of Kalamazoo approved its own social equity policy giving a 25% reduction in city license fees for those who met the qualifications. The policy also designates 25% of fees and tax generated revenue toward programs focused on helping people of color prepare for ownership/operations of future marijuana establishments and community education.

As a Native American man and a Black man, Friske and Thurin are the minority within Michigan’s cannabis industry.

Data collected in December 2020 by the Marijuana Regulatory Agency showed that only 3.8% of stakeholders in the recreational marijuana industry are Black or African American and 1.5% are Hispanic or Latino.

In an effort to diversify the industry from the inside out, Friske and Thurin are looking to not only employ but promote people of color, minorities and women.

“There’s different types of activism out there,” Thurin said. “You can be out there on the street and then there’s times where you can use your opportunities to benefit other people in different ways.”